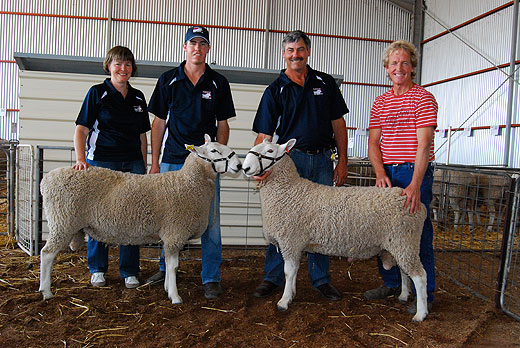 Their was a tug-o-war between buyers for a ram in the top one per cent of the breed for Lambplan figures.

The 107 kilogram ram was sired by Inverbrackie 357-08, a ram the Kember’s purchased from Western Australia which was also in the top one per cent of the breed for Lambplan figures.

The ram, which had the highest dollar index in the catalogue at $128.48, was eventually secured over the phone by Ross Lomas, Point Vale Super Borders stud, Canvendish, Victoria, who had inspected the ram prior to the sale.

The 95kg ram, which still had its lambs teeth, had an dollar index figure of $125.26- in the top three per cent of the breed.

The ram was sired by Gleneith 40-06, a sire with good linkage as he had been used in nine other flocks.

The rams will be used over his 600 Merino ewes, Mr Doyle’s target market is the Corowa special first cross ewe sale each November where he sells his 14-month-old first cross ewes lambs.

Volume buyer on the day was Colin Weissell, Elders Wagga Wagga, who secured 30 rams for a corporate enterprise for $800 each.

Gleneith stud co-principal, Wes Kember said they were extremely happy with this years sale result with the sale eclipsing their own previous record price of $4000.

The sale was conducted by Elders Narrandera and JL Buchanan, Coleambally, with Nick Fogarty and Justin Buchanan the respective auctioneers.